Starting the month of march 2022, we at Coinomo will aim to provide our readers a monthly deep-dive article on the hottest crypto news or concepts in the crypto industry.

The first quarter of 2022 has gone off to a wild and unprecedented start for crypto and the world. Rampant inflation, forecasts of interest rate hikes, and a tumbling stock market indicate that the global economy is already well in the midst of a bear market. Cryptocurrencies were not spared; crypto overall market cap declined over 20% throughout January, with a significant crash on Jan 21st, where the market cap dropped over $200b in just 24 hours.

Even as investors brace for difficult times ahead, rising geopolitical tensions in Eastern Europe during February dashed hopes of an early market rally. Signs of economic recovery seem further unlikely as the conflict escalated into a full-blown war between Ukraine and Russia. Crypto has proven to be an excellent instrument for diversification and the robustness of the market. In this time of conflict, cryptocurrencies have also demonstrated their value as not only an alternative store of value but also as a lifeline for those affected by war.

Events throughout 2021 and before have shown that such cases of short-term volatility in crypto prices are not exceptional occurrences. We observe that short-to-mid term price performances are generally affected by three factors.

Both the actual supply and future perceived supply of money affect crypto prices. Crypto prices will be to critical Federal announcements by the US government and updates to the consumer price index (CPI).

There is no better example of an extraordinary event than the ongoing war between Russia & Ukraine. Historically, war-related sell-offs were almost always observed during the anticipation and early stage of the war. This is often followed by rallies that typically last 3 to 6 months, until other factors dominate the market. This pattern was observed to a certain extent in both the Vietnam War, the Crimean conflict, and the Iraq war. 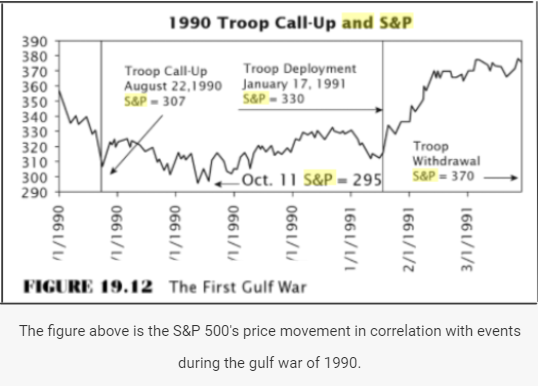 The exception to this phenomenon is during the Afghanistan war of 2001, where the market dropped sharply after air campaigns in early October, followed by only a short and mild rally. The market didn’t rebound to the pre-911 level until Jan 2004. That period bears resemblances to our current macro-economic conditions with high inflation rates. Recent rallies in BTC/ETH prices are likely the auto-correction of the war-start sell-off rally, but we remain cautious about the price rebound, which is reflected in our hedging strategies.

BTC prices have demonstrated a higher correlation with tech stocks & Nasdaq over the past year. We see a temporary “de-pegging” during mid-February, but the higher correlation is unmistakable. This means that crypto prices will be sensitive to tech news in the blockchain ecosystem (higher relevance) and general tech (lower relevance.)

In general, the crypto market has performed better than tech stocks for the past month. The Nasdaq composite has declined 6% in February, while ETH and BTC prices gained around 7% during the same period.

Bitcoin as a “Conflict Currency”

Since the beginning of the conflict, Ukraine has received over $100 million in crypto-asset donations after garnering the support of crypto-natives around the world. Not only is this the first case of a sovereign nation directly calling for donations in crypto assets, but it breaks the record as the most successful crowdfunding campaign in crypto history. Ukraine has put its donations to use in purchasing military equipment and funding its cyber warfare division against the Russians. 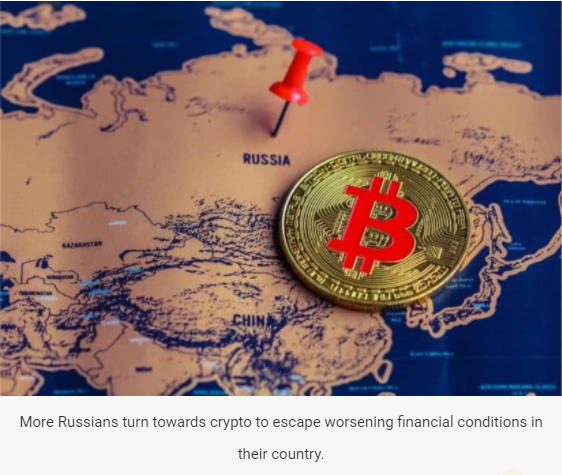 On the opposite side of the conflict, severe sanctions imposed on Russia by the west have caused the collapse of the Russian economic and financial system. A bank run has occurred as long queues appeared near ATMs and banks as everyday Russian citizens scrambled to withdraw cash.

Furthermore, on 25th Feb Russian authorities released a statement threatening to seize citizen assets – amounting to over $60T rubles – should western sanctions worsen. This statement, together with the Ruble’s recent crash in value, caused an interesting phenomenon on the Bitcoin prices. This news coincided with increasing levels of ruble-BTC trading activity as reported by crypto exchanges around the world. Should the Russian state begin to seize private property, authorities will be unable to take civilian assets stored on decentralized platforms. This marks one of the most salient moments when everyday people realize the utility of cryptocurrencies, both as a protection of assets and a store of value.

For better or worse, crypto has demonstrated its value as a “conflict currency.” It funds one side of the war while providing a lifeline for the citizens of the other.

Decentralized wallets are not subject to any government regulations, and are able to circumvent sanctions or situations where the movement of funds is limited. For crypto-enthusiasts, the Ukraine-Russia war has only proved the necessity and importance of decentralization; For government agencies, it shows the potential risks of an unregulated financial instrument.